Weather As Expressions Of Pj Problems

Weather is the condition of the atmosphere (air surrounding earth) at any given space-time. Most of earth's weather occur in the Troposphere (the first layer of the atmosphere with height above earth's surface ranging between 10 km and 20 km). The other layers are consecutively: the Stratosphere, the Mesosphere, the Thermosphere or Ionosphere (high temperature of about 2000oC), and the Exosphere which extends to the threshold of the Magnetosphere which is devoid of gas and usually the domain of weather statellites.

The key players influencing the conditions of the atmosphere that consitute weather are: the sun, air mass, land and water surfaces on earth, plants and elevations. An air mass is a large body of air that has the same temperature and contains the same amount of moisture throughout. Air masses are named according to their region of orign and their travel path. Some main air masses are: maritime tropical (mT), maritime polar (mP), maritime artic (mA), continental polar(cP) and continental tropical(cT). A front is where two air masses meet.

The radiant energy of the sun is the source of the heat energy responsible for the creation and sustenance of weather. The sun's rays heat earth surfaces unevenly because they strike the earth at variable angles (a consequence of the earth's tilt, axial spin and movement around the sun). Consequently, some regions are hot while some regions are cold. For example, the most direct rays of the sun strike the earth around the equator, so the region around the equator gets a lot of the heat energy of the sun while latitudes below and above it get lesser and lesser heat as one moves towards the poles. This temperature gradient results in the transfer of heat from high temperature zones to low temperature zones via movement of air (wind). Temperature is the measure of the degree of hotness or coldness of a substance. In other words, temperature measures the average kinetic energy of the molecules of a substance. The faster the molecules are moving, the higher the temperature. A lower temperature implies that the molecules are moving more slowly. The energy transferred as a result of the temperature differential between substances is called heat energy and it is transferred from substances at higher temperatures to substances at lower temperatures until there is temperature equilibrium. 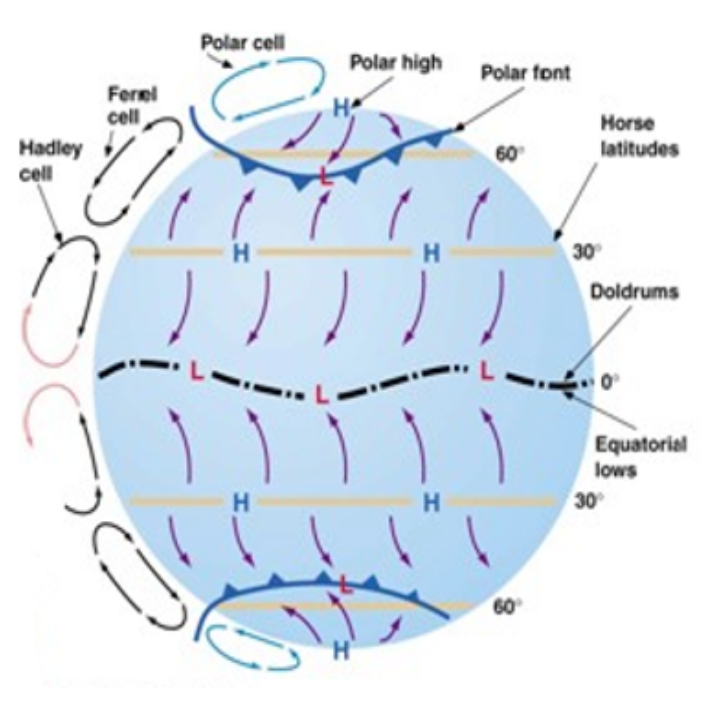 Will it be hot tomorrow (sun is working)?; or not so hot (perhaps cloud cover)?; will it be dry (no moisture in the air)?; or wet (moisture in the air, relative humidity, dew point)?; Are those tropicanas sending their cyclones (hurricane in the US, Willy Willy in Australia) again? The answers to these and many other weather questions are blowing in the winds. These answers are expressed as weather measurements and their averages (average weather) over a period of many years constitute the climate of a region.

The containership of the sun; the sun and its radiant energy; the containership of earth and its atmosphere; earth and its atmosphere; the interactions of the sun's rays and earth's surfaces; the transfer of heat from earth's surfaces to its atmosphere; air masses and their motions; the interactions and groupings of air masses; the fronts the form; the rise of warm fronts and the fall of cold fronts and the pressures they exert; are all expressions of Pj Problems. Consequently, weather is an expression of Pj Problems.