Room in its essence is a container: a partitioned space into which has been mapped at least one function. Consequently, we have the bedroom, the bathroom, the living room, the dining room, the classroom, the war room, the situation room, the powder room, the show room, the head room, etc. The room in focus in this presentation is the philosophic room proffered by the great mathematician Blaise Pascal (A.D. 1623 - 1662):

All of humanity's problems stem from man's inability to sit quietly in a room alone. Blaise Pascal.

Blaise Pascal's philosophic room is akin to many other ancient wisebites that propose solutions to human problems through human behaviour. For example, Love your neighbor as yourself and the love of money is the root of all evil. However, Pascal's philosophic room is perhaps unique in its proposition of a strictly physical elixir (quietude in the room) for all of humanity's problems. This proposition from a great mathematical mind is brilliantly packaged. So, let's attempt to unpack it.

A TECian (one with a TECtechnics view of knowledge) and other regular visitors to TECtechnics.com know that all of humanity's problems can be grouped into only seven types of problems. So, we are concern with only seven types of problems in Pascal's philosophic room. Also, it is assumed that females are not excluded in the philosophic room because Pascal only states man's inability. 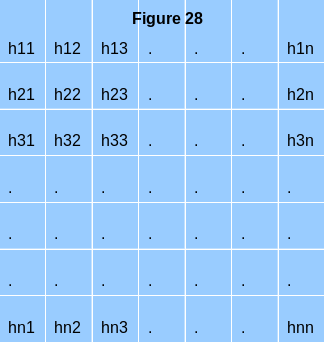 Now consider the n x n array of figure 28. Let the array be a human subspace H, and let each cell represents a room containing only one person hij sitting quietly. H is in static equilibrium for an appropriate frame of reference that allows us to ignore galatic and planetary motions. This initial boundary scenario establishes mans ability to sit quietly in Pascal's philosophic room. Now, is H free of humanity's problems given this initial boundary scenario? It depends. H may not be free of humanity's problems if there exist pre-existing health problems (physical, mental or spiritual) in any hij in H even though they are all sitting quietly alone in their respective rooms. For example, congenital diseases are independent of a person's ability to be alone and quietly seated in the room. Consequently, congenital diseases are only members of the populations of humanity's problems in Pascal's philosophic room in the sense that they may be problem triggers. For example, a congenital psychosis may trigger a person to initiate adverse problems in the space. The mentally ill hij may leave his or her room to cause adverse problems in other rooms. In fact, it is always pre-existing health disequilibriums of various types (the majority of which are non-congenital) that trigger the force problems that start the motion problems that result in adverse human problems in space. In other words, All of the humanity's problems that stem from man's inability to seat quietly alone in a room is due to a resultant force from pre-existing health disequilibriums (permanent, temporary). Many pre-existing health disequilibriums are often not recognized as such. For example, a burst of anger, jealousy, covetousness are offshoots of pre-existing health disequilibriums and perhaps together cause most adverse human problems.

The force triggered by pre-existing health disequilibriums is not always deliberately initiated. In other words, a person can leave his or her room without knowing that a pre-existing health disequilibrium that can cause adverse human problems in space, exists within him or her. For example, an asymptomatic carrier of a virus may spread the virus unknowingly. In this case, the exit from the room is a consequence of the dynamism of existence: humans are naturally programmed to be mobile. This is why nature gave them legs. Consequently, they can not remain seated quietly alone in a room permanently and for many, even for a brief moment.

The dynamism of existence establishes man's inability to sit quietly in a room alone. Consequently, the initial boundary scenario of static equilibrium as illustrated in figure 28, is only transiently feasible. The inevitability of an exit from the room of pre-existing health disequilibriums established and perpetuates adverse human problems.