On December 18, 2019, The Democrats in the House of Representatives voted to impeach President Donald J. Trump, the 45th president of the United States of America. The accusations of Abuse of Power and Obstruction of Congress as stated in the articles of impeachment were not proved. Proofs are very important aspects of any advanced society: mathematicians dependent heavily on them to establish mathematical laws; their importance is the reason scientists established the scientific method and lawyers depend heavily on proofs (body of evidence) in court trials. I shall briefly describe the nature of proofs shortly, but first, let us briefly examine Abuse of Power and Obstruction.

In physics, power is defined as the rate of doing work. In the context of human groupings and interactions, power is the possession of authority and the means to exert the authority. Both definitions are similar in the sense that their manifestations are expressions of work. Abuse of power simply means misuse of authority. This misuse of authority may range from benign to deadly. A parent who forces his or her child to eat a vegetable not of the child's liking eventhough the vegetable is good for the child's health, misuses his or her authority benignly. The use of deadly force in a simple arrest scenario is deadly misuse of authority. Force is always implied whenever power is exerted. In the context of human interactions, the force may be positively impacted (i.e. the power does good work) or negatively impacted (i.e.the power does bad work). When power is abused, bad work is done and there is always at least one victim. 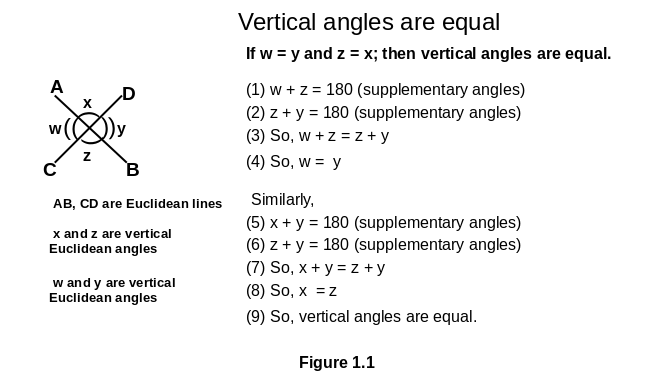 Consider figure 1.1. It illustrates a simple proof-structure. The proof-sought is: vertical angles are equal (statement 9 in figure 1.1). This proof is arrived at by layering sequential proof-statements that are based on an axiomatic structure (i.e. axioms of Euclidean geometry) and a set of definitions (i.e definitions of straight lines, angles, supplementary angles and vertical angles in Euclidean geometry).

There were several eloquent speeches by congressmen and congresswomen in the public hearings (Intelligent Committee and Judicial Committee hearings) and on the House floor before the impeachment votes were cast. However, eloquence does not build proof-structures. It beautifies it at best. In the final analysis, the Democrats in the House of Representatives were unsuccessful in building a comprehensive proof-structure for the offenses stated in the articles of impeachment.

The rush to impeach, trivialized the Obstruction of Congress offense because the Democrats in the House of Representatives arrived at their desired destination (impeachment of the president) in record time and without the re-routing of the impeachment process (the Republicans complained about the unfairness of the process, however, the process was not re-routed). So at best, the Democrats in the House of Representatives can only claim Partial Obstruction of Congress (recall that If motion arrives at its desired destination then there was either no obstruction; or the obstruction was removed; or there was only partial obstruction; or there was a re-routing of the motion). Partial Obstruction of Congress cannot be an impeachable offense especially when the court has not ruled that the particular instances are not subject to executive priviledge and a citizen's right to refuse search without a court order.

The danger of proofless impeachments is that they are attempted coups. They must never be allowed to flourish in any society. The most important characteristic of an advanced society is Justice. Humans rule human spaces. It is humans who write, interpret and implement the laws. The rule of law rules only if humans justly write, interpret and implement the law.