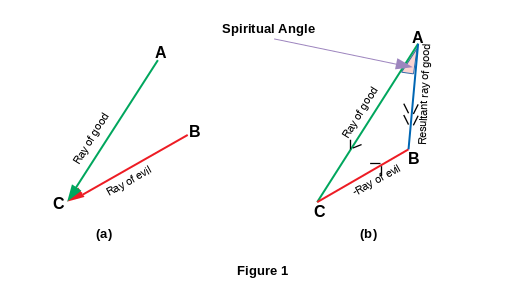 The concept of good and evil is the basis for belief systems. A monotheistic belief system has at its core, a Supremely Powerful Good Deity Who Takes Care of believers and fight their wars against a very powerful Evil deity who with his followers are perpetual manufacturers and merchants of evil. In other words, good has its source in the Ultimate Good Deity while evil has its source in the ultimate Evil deity. A belief system describes what is good and what is evil from its worldview. But because belief systems are varied among humans, good and evil can be relative. However, humans in general consider some evils to be absolute. Humans rationalize their behaviors when they actuate absolute evils (e.g. wars, murders, slavery) until the collision occurs.

The spiritual angle in the context of belief systems is extremely important. Its existence informs believers that the ray of good and the ray of evil have collided. Consequently, believers are assured that the ray of evil will be subtracted from the space after the collision and an edifying ray of good will result from the collision. In other words, the spiritual angle is a mathematical essence of good prevailing over evil.

Consider figure 1a. Assume ray AC is a ray of good and ray BC is a ray of evil. They collide at point C. Now consider figure 1b. After collision, the ray of good AC, maintains its direction while the ray of evil BC, is negated (subtracted from the space). So, BC becomes -BC which is the direction CB. The resultant ray of good is the ray AB. The spiritual angle is the angle <CAB. The measurement of the spiritual angle is not necessary. It is necessary and sufficient that it exists.

The spiritual angle is the keystone of belief systems and it exists anywhere good triumphs over evil. For example, in Christianity, the Ray of the Good Teachings of Jesus Christ collided with the ray of the evil of His crucifixion. The Resultant Ray of Good is His Resurrection and Ascension. Also, the resultant ray of good of St Paul's conversion and the spread of the gospel to the gentiles is a direct consequence of the collision of the ray of the evil of Saul's persecution of christians and the Ray of the Good of Jesus' Powerful Call .

The collision of the ray of good and the ray of evil can be initiated by either ray or simultaneously by both rays. No matter the initiator of the collision, the resultant ray that makes the spiritual angle possible is always an edifying ray of good.