Proteins As Expressions Of Pj Problems 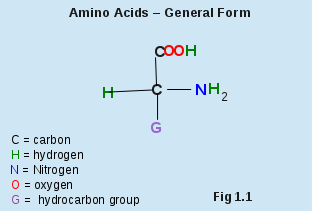 Figure 1.2 illustrates the linking of the amino acid Glycine with the amino acid Alanine to form Glycylalanine dipeptide. The peptide bond (or amide bond) is the bond that links a carboxylic acid group of an amino acid with the amine group of the other amino acid. In other words, the peptide bond (or amide bond) links the carbon atom and the nitrogen atom in the amide group of a protein molecule. The Glycylalanine dipeptide shown in figure 1.2 has an amine group at one end and a carboxylic acid group at the other end. This amine group left-end and carboxylic acid group right-end are characteristics of all protein molecules. Consequently, the identity of a protein is determined by its side chains and its amino-acid sequence. Therefore, Glycylalanine dipeptide is a different protein from Alanylglycine dipeptide eventhough both are constituted by the same two amino acids. In the latter, the amine group left-end belongs to Alanine.

Proteins are very important substances in living organisms. The expression of genetic information is realized ultimately through proteins, especially the enzymes that catalyse metabolic reactions.