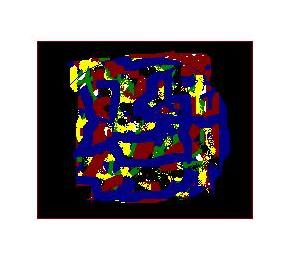 One of the disadvantages of the over-departmentalization of the Knowledge-Information Continuum by humans, is the loss of the holistic view of the Universe. For example, according to this departmentalization, art is different from science and mathematics. But how are they different?: in essence, in perception, or just in definition? We shall see shortly, that painting which is quintessentially art is mostly mathematics and that its art-aspect results only from its impact on human emotions.

The essence of mathematics is existentially apriori and had been used to solve practical problems in the civilizations before the Greek civilization. However, the formalization of pure mathematics that is independent of practical necessity, began in ancient Greece. So it came to be that it was in Europe that Renaissance painters formally used mathematics to revolutionized painting. In fact many of the painters of the fourteenth, fifteenth and sixteenth centuries were also sculptors, inventors, engineers, architects, military strategists, etc. For example, when Leonardo da Vinci offered his services to Lodovico Sforza, ruler of Milan, he promised to serve as military engineer and designer of war machines, sculptor, architect and painter. Furthermore, this was a time in Europe when painters were influenced by doctrines which proclaim that nature holds the truths and that the essence of natural phenomena is best expressed through mathematics. Out of this prevailing mind-set came realism, the art movement led by Cimabue (ca. 1300), Cavallini (ca. 1250-1330), Duccio(1255-1318), and Giotto (1266-1337, often called the father of modern painting), and in the process, the eventual founding of the mathematics of perspective in 1425 by the architect and sculptor Brunelleschi (1337-1446). The mathematics of perspective which is known as the system of focused perspective was popularized by the architect and painter Leone Battista Alberti (1404-1472) in his technical writings in which he explained many theoretical matters to artists. In his book Della Pittura (1435), Alberti emphasized that the arts are learned by reason and method; that the first necessity of a painter is to know geometry so that through painting, the mathematical structure of nature may be revealed and perhaps improved. Brunelleschi's mathematical perspective was later developed by several artists among whom were Paolo Uccello (1397-1475), Piero della Francesca (1416-1492), and Leonardo da Vinci (1452-1519). Later improvements by professional mathematicians, eventually led to the founding in the seventeenth century, of the branch of mathematics known as projective geometry. The subject of projective geometry is extensive and will not be discussed here. Suffix it to say that its basic conceptual elements are: projection and section. A projection is a set of lines of light from the eye of an observer of an object or scene to the points of the object or scene. A section is the pattern formed by the intersection of these lines with a glass screen placed between the eye and the object or scene viewed. The objective of projective geometry is to study the properties common to a figure and a section of a projection of that figure, or to two sections of the same projection, or to two sections of two different projections of the same figure. Now let us examine the basic concepts of painting in the general sense.

The development stage begins when the product of the conceptualization stage is transferred to the painter's canvass and the various brush strokes of colors are established on the canvass. This stage is an expression of pj problems: the geometry of the canvass; the transfer of thought to strokes on canvass; the motions of the strokes; the grouping/interaction of the colors; are all pj problems.

The actualization stage establishes equilibrium between thought and space in a snapshot of Time. Will the painting be a masterpiece or just ordinary? Well, that will depend on the extent of its impact on human emotions.

Nature only speaks mathematics within the context of 7 universal concepts (Pj problems). This language is uniform everywhere in the Universe and is not to be confused with the human definition of mathematics (the former is apriori). Consequently, there is nothing that happens in the Universe that is not mathematically structured. In other words, the Universe and the beings in it and the being of the beings are all mathematically structured. You are a mathematician, whatever your profession: an actuary, or an anthropologist, or an artist, or a biologist, or a chemist, or a physicist, or a doctor, or an economist, or a lawyer, or a linguist, or an engineer, or an accountant, or a politician, or a businessperson, or a theologian, etc. The differences exist only in approach, complexities and manifestations.