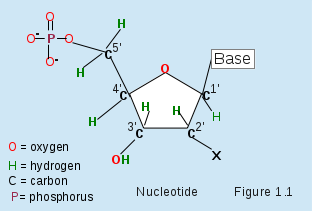 There are four nitrogeneous bases of interest in nucleic acids. In DNA, they are: Adenine (A), Thymine (T), Guanine (G) and Cytosine (C) figure (1.2). In RNA, Uracil (U) replaces Thymine. The only molecular difference between Uracil and Thymine is that the methyl group (CH3) in Thymine is replaced by hydrogen (H) in Uracil. These four bases (A, U, G, and C) constitute the alphabet that encodes the characteristics of an organism. Triplet combinations from this alphabet form the words (called codons) that make up the language of genes (a gene is a molecule of DNA). 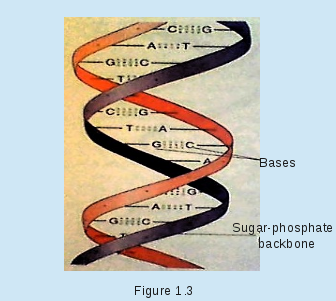 The DNA molecule is presented in vivo as a right-handed double helix structure (proposed by Watson and Crick in 1953). Figure 1.3 is a simple illustration of the double helix structure of DNA. Each strand of the double helix is a sugar-phosphate strand formed by phosphodiester bonds. A phosphodiester bond is a bond formed between the 5' phosphate and 3' hydroxyl groups of two nucleotides. The bases attach to each strand in a manner that renders the strands complimentary to each other. In other words, the location of a base on the sugar-phosphate backbone of the double helix structure of DNA is determined by the grouping that allows only specific pairings of the bases. The bases adenine and guanine (known as the purines) are not allowed to pair with each other. Likewise, the bases thymine and cytosine (known as the pyrimidines) are not allowed to pair with each other. Only purine-pyrimidine pairings are allowed. Consequently, adenine (A) pairs only with thymine (T); and guanine (G) pairs only with cytosine (C). This base sequencing sets the stage for the transcription of the base sequence of interest by messenger RNA (mRNA) which carries the base sequence out of the nucleus to the ribosome RNA (rRNA) in the cytoplasm where the base sequence is translated with the help of transfer RNA (tRNA) into the amino-acid sequence that constitutes the protein of interest.

The matter that bond to form nucleotides; the chemical reactions that establish the bonds; the chemical bonds; the grouping of nucleotides to form nucleic acids; the base sequencing; the work mRNA, rRNA and tRNA do in the transcription and translation of base sequences; and the translated protein are all expressions of Pj Problems. Consequently, nucleic acids are expressions of Pj Problems .