By the seventeenth century, mathematicians and other thinkers were faced with old problems in new clothings. The problems of lengths, areas, volumes and motion were old problems that ancient Egyptians, Babylonians and Greeks encountered and to which they devised significant practical and theoretical solution methods. But early in the seventeenth century, the need to devise solution methods for the motion of projectiles; the motion of the moon and planet to aid navigation; the motion of light to improve the design of the newly discovered telescope and microscope became paramount to mathematicians and scientists. Furthermore, heliocentric astronomy as originated by Copernicus and Kepler had replaced the Aristotelian laws of motion. So, new methods of analysis were required. From this background, came the new science of motion that was created by Galileo and Newton, and in the process, the mathematics of functions and calculus. In essence, calculus which consists of differential calculus and integral calculus was spirited by the desire to solve Pj problems.

The Infinitesimal And Continuity

The most familiar meaning assigned to the integral sign (∫) is that of summation. But summation of what? Why is the sigma sign (Σ) not sufficient for all types of summation? In order to answer these questions one must understand the notion of the infinitesimal and how mathematicians have used it to establish continuity. To the mathematician, an infinitesimal is an extremely small space of the space of interest; and continuity means no-jump. This no-jump definition is explained in the continuum. Most matter and natural phenomena exist as continuums. For example, the smooth surface of a table is a continuum, distance traveled between stops (without jumps) is a continuum. In fact, existence in general, is a continuum. In order to establish a continuum, the mathematician considers several infinitesimals in the space of interest; establishes a relationship that is dependent on the infinitesimals; sums the relationships and then sends the infinitesimal towards zero (never quite arriving at zero). Consequently, the discrete summation represented by the sigma sign (Σ) is replaced by a continuous summation represented by the integral sign (∫) as the infinitesimal approaches zero. The mathematical concepts of infinitesimals and continuity have served humanity greatly: it is at the heart of all advanced human knowledge. They are often used to establish solution methods for containership problems such as the length of a curve, areas under curves, solids of revolutions; and motion and change problems involving rate of change. 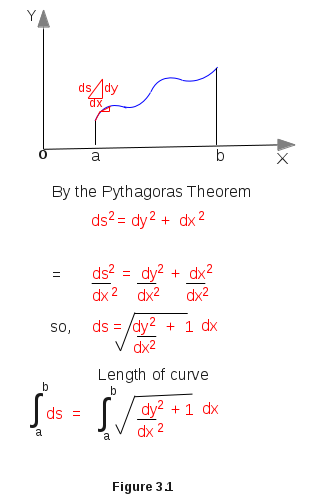 Length Of A Curve

Once the concept of a straight line as defined by Euclid was understood, it was easy to observe that many paths of motion are not straight lines. These paths that are not straight lines are called curves (Examples of curves are the circumference of a circle and the path of a projectile). An important aspect of motion is to determine the length of the path traveled. When the path is a straight line or a circular curve, theorems of Euclidean geometry can accurately determine its length, and until calculus was discovered, these theorems were also sufficient for approximating the lengths of non-circular curves. After integral calculus was discovered, it was used to calculate lengths of curves. Consider the curve in figure 3.1:

In figure 3.1, the infinitesimal secant ds is considered. Its length is determined by the Pythagoras theorem and then summed over the given interval to determine the length of the curve.

Area under A curve And Riemann Sums 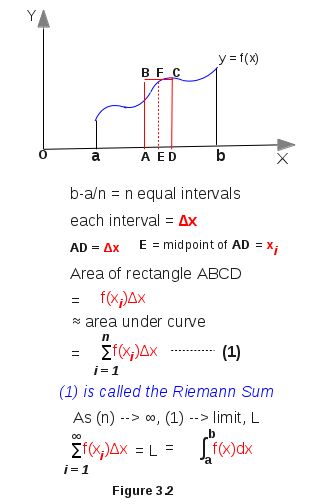 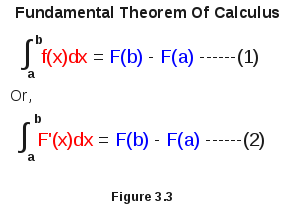 Equations (1) and (2) of figure 3.3 are the two forms of the Fundamental Theorem of Calculus. The differrence between equation (1) in figure 3.3 and the following expression for antiderivatives:

∫f(x)dx = F(x) + C (where f(x) is a derivative of F(x) and C is a constant) is the presence of the lower and upper limits a and b (these limits make this integral a definite integral as opposed to the indefinite integral used for the antiderivatives) and the absence of C in equation (1) in figure 3.3. Now lets informally show why equation (2) of figure 3.3 is true: