Electromagnetism As Expressions Of Pj Problems

Electricity
The fundamental electric quantity is charge (electron and proton). The charge of an electron is -1.602 x 10-19 C and the charge of a proton is +1.602 x 10-19 C (charge unit C, is the Coulomb and symbol is Q or q). Electric current is the amount of charge passing through a given cross sectional area per second (current unit A, is the ampere and symbol is I or i). 1 ampere (A) = 1 coulomb/second (C/s). When q is a function of time, i = dq/dt. In essence, electric current is charges (positve or negative charges) in motion. In metal conductors through which electric current passes easily, the moving charges are free valence electrons (6.25 x 1018 electrons in 1 Coulomb of charge). So, a current of 1 ampere passing through a given cross sectional area of a conductor is equivalent to 6.25 x 10 18 electrons flowing through the area per second. 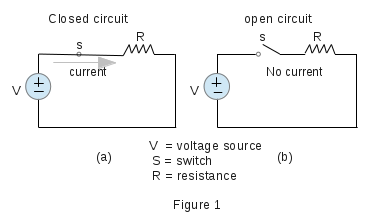 It is voltage that is the source of current. An unbroken path showing the flow of current from its source, through loads and back to its source, is called a complete or closed circuit (figure 1). The circuit is an open circuit if there is no closed path for the current to return to the source. The current is direct curent (dc) if it flows in only one direction (polarity of voltage source is fixed). The current is an alternating current (ac) if its flow changes direction periodically (voltage source reverses or alternates polarity periodically).

Magnetism
Magnetism is a force (attractive or repulsive) exerted by some materials. These materials are called magnets. The two end regions of the magnet where the magnetic effects are strongest are called the poles (one end is called the north pole and the opposite end is called the south pole). Like poles repel each other while unlike poles attract each other. Atoms have magnetic fields (as revealed by their electrons' orbital magnetic quantum numbers). Materials become magnetized when atoms (particularly the electrons) group in such a way that their magnetic fields are all aligned in the same direction. The region where such atomic alignment occurs is called the magnetic domain. 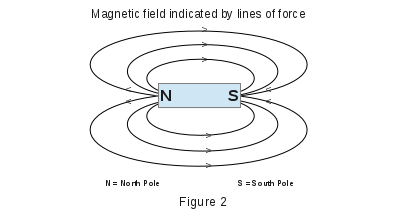