The Atom As Expression Of Pj Problems - Peter O. Sagay

An element is a pure substance. Substances are the different kinds of matter. A pure substance is made up of the same material(it is the same througout). An atom is the smallest part of an element that has all the characteristics of the element. Particle physicists have discovered paticles of matter smaller than the atom and they have grouped all subatomic particles into two groups: Hadrons which consists of baryons and Messons both of which consists of quarks; and Leptons. However, the atom is the smallest building block on Earth.

The orbitals hold negatively charged particles called electrons (considered to be a lepton). The number of electrons in a neutral atom equals the number of protons. The electron was discovered in 1897 by Joseph John (J.J.) Thomson (1856AD - 1940). J.J. Thomson is also credited with the discovery of the proton.

where A is its atomic mass, S is the element's symbol and Z the atomic number. 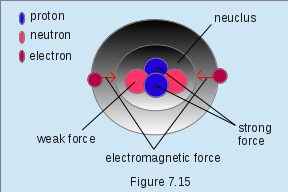 There are four active forces in an atom (figure 7.16):
(a) The strong force: opposes the repulsion force between protons and keeps protons together. It makes the nucleus possible and without it there would be no atoms. Its sphere of influence, that is, its force field has a limited range. It is effective only when protons are very close together.
(b) The electromagnetic force: functions either as a force of attraction or as a force of repulsion. If particles of the same charge are in its force field, it acts as a force of repulsion between them. It acts as a force of attraction if the particles have opposite charges. Electrons are kept in orbit around the nucleus by the electromagnetic force. The negatively charged electrons are attracted to the positively charged nucleus.
(c) The weak force: is responsible for radioactive decay, a process whereby a neutron in the nucleus changes into a proton and an electron. The weak force is very present in the sun. It plays a fundamental role in the nuclear processes responsible for the power of the sun.
(d) Gravity: has a weak presence inside the nucleus of an atom and its role in the nucleus is yet to be fully understood. However, it is a force of attraction exerted between all objects in nature. It is more evident in the attraction between large objects.

Motion
There are four types of motion in an atom:
(a) The motion of electrons around the nucleus. The exact positions of the electron during this motion is nondeterministic. In other words, only the probability of an electron being at a position can be determined. The determination of this probability requires a general knowledge of quantum mechanics and the following concepts in particular: Heisenberg uncertainty principle (formulated by Werner Heisenberg); Erwin Schrodinger's wave equation (formulated by Erwin Schrodinger); and Pauli exclusion principle (formulated by Wolfgang Pauli). These concepts are too terse for this TECnote.
(b) The rotation of an electron about its axis. This motion is called the spin of the electron. It is given the value 1/2 (the spin quantum number) for every electron. The spin is +1/2 if the electron rotates in the direction of the magnetic field that contains the it. The spin is -1/2 if the electron rotates in the direction opposite to the direction of the magnetic field that contains it. This orientation in the magnetic field is called the spin quantum number.
(c) The motion of electrons from one energy-level to another energy-level: When an electron in a low energy level is sufficiently energized by external energy source, it moves to a higher energy level. The electron is said to have been excited. The excitation energy is eventually released (emission) and the electron returns to its prior energy-level.
(d) The dislodgement of an electron from the atom. The electron moves out of the atom.

Change
(a) Change in the nucleus of an atom: This change is caused by radioactivity, a process in which atomic nuclei emit rays (particles) in other to become more stable. There are three types of rays that atomic nuclei emit:
(i) Alpha rays (α): an alpha particle consists of 2 protons and 2 neutrons and is often represented as a He++ (a helium nucleus, the atom without its two electrons). The radioactive process that emits an alpha ray is called an alpha decay. Alpha decay changes the identity of an atom by reducing its atomic number (the number of its protons). The reduction in the number of neutrons also add to the identity change. Both atomic mass and atomic number of an atom change after an alpha decay.
(ii) Beta rays (β): a beta particle is an electron formed inside the nucleus of an atom. An electron is formed inside the nucleus when a neutron decomposes into a proton and an electron. The radioactive process that emits a beta ray is called a beta decay. Beta decay changes the identity of an atom by increasing its atomic number without changing the atomic mass of the atom.
(iii) Gamma rays (γ): a gamma ray is one of the electromagnetic waves in the electromagnetic spectrum (visible light, radio waves and infra-red waves are some members of the spectrum). A gamma ray has high energy, extremely high frequency and short wave length. It is also the most penetrating radiation emitted by radioactive elements. The radioactive process that emits a gamma ray is called a gamma decay. Gamma decay often accompanies Alpha and Beta decay. However, its emission does not change a nucleus into a different nucleus. The change that occurs due to gamma decay is a change in the energy-state of the nucleus. The high energy emitted by a gamma decay causes the nucleus to transit to a lower energy state.

The spontaneous and continuous decay of a radioactive element form new elements, until a stable nonradioactive nucleus is formed. The series of steps that lead to the formation of the stable nonradioactive nucleus is called a decay series. The concept of decay series explains why some elements continue to be present in nature even though their half-lives indicate that they should have been extinct. For example, the element radium has a half-life of 1600 years, so it is not supposed to be present on Earth today. Its presence is due to the decay series of uranium-238 which has a half-life of 4.5 billion years.

Atoms interact primarily to bond together. Their valence electrons (electrons in their outermost shells) bring about the bonding. There are three basic types of atomic bonds: 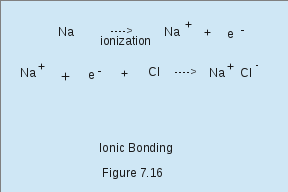 Atoms share their valence electrons to attain a more stable outermost shell. The shared electrons spend most of their time between the atoms because of the simultaneous electromagnetic force between the nuclei and the shared electrons. A covalent bond is illustrated by an electron-dot diagram (figure 7.17). The electron-dot diagram represents the nucleus and all shells before the valence shell, by the symbol of the atom and represents the valence electrons are represented as dots surrounding the symbol. For example, figure 7.14 shows the electron-dot diagram for the covalent bonds between hydrogen atoms, chlorine atoms and hydrogen and chlorine atoms.

(c) Metallic Bond. This is a bond solely between metals. Metals are generally donors of electrons so in a metallic bond there is no atom with electron affinity to readily accept the donated electrons. Consequently, there is a resultant free-moving sea of electrons in a common electron cloud formed by the outer electrons of the atoms that are all simultaneously attracted by the positive nuclei of the atoms.