In differential calculus, the instantaneous rate of change of a variable with respect to another variable is called the derivative of the function that relates both variables. For example, y = f(x) implies that the variable y is a function of the variable x (y is the dependent variable and x is the independent variable). The instantaneous rate of change of y with respect to x, that is, the derivative of f(x) = dy/dx = f'(x). This derivative is also the slope of f(x) at the point x.

The implication of theorem I is that one can find all the antiderivatives of a given function once one antiderivative is known. The standard mathematical representation of this fact is as follows: 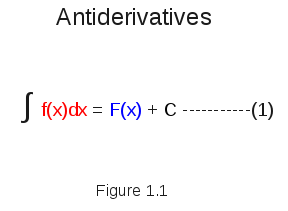 The symbol ∫ is called an integral sign. f(x) is a function whose antiderivatives are F(x) + C. The entire notation ∫ f(x)dx is called an indefinite integral and it represents the antidiffrentiation of the function f(x). The variable of interest is always indicated by prefacing it with the letter d. For example, if t is the variable of interest, equation (1) in figure 1.1 will become ∫ f(t)dt = F(t) + C. Equation (1) in figure 1.1 is the bridge between differential calculus and integral calculus.

Applications Of The AntiDerivative

Solution to Problem I: let s(t) be the height of the rocket at time t, then s'(t) is the rate at which the height is changing with respect to t.
So, s'(t) = v(t). Hence s(t) is an antiderivative of v(t). Therefore, we can apply equation (1) as follows:

Problem II: A company's marginal cost function is 0.015x2 - 2x + 80 dollars (x is the number of units produced per day). Company's fixed cost = $1000 per day.
(a) What is the cost of producing x units per day?
(b) Determine the increase in cost if the current daily production of 30 units rises to 60 units per day.